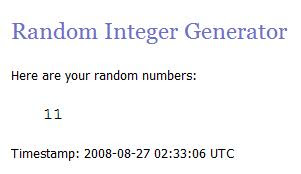 The winner of the clutch from my 100th post giveaway is Gabes from SweetP! Thanks to everyone who commented - I think that is the most comments I've had on a post.
I'm off to Melbourne for a few days of catching up with family and shopping (Meet Me At Mikes and Amitie here I come!), but I'll be back next week with some more finished knitting WIPs to show you plus hopefully some things from Melbourne. Have a great weekend!
Posted by Louise at 14:39 1 comment:

In preparation for doing a lot of sewing for the Etsy shop, I've been working on finishing my knitting WIPs. The first was the stripy hat I posted last week. This is the next one. It's from a Debbie Bliss pattern called Cable and Moss Stitch Baby Hat. Knitted in 4ply merino. Until I knitted this pattern I was a bit scared of cables. The way the stitches twisted over themselves looked pretty complex to me. But I have now discovered the secret of simple cables - every few rows you swap the order of a couple of stitches, knit them, do a few purl stitches or some moss stitch in between and Bob's your Uncle. I can feel a more complex cabled project coming on next - maybe the Central Park Hoodie for next winter.
Posted by Louise at 07:33 5 comments:

The other morning as I was leaving for work, I spotted the first flowers on our small kowhai tree. I was so excited that I rushed back inside and grabbed the camera to get a photo in case the wind battered it later in the day. There are a whole lot more buds about to open. And the magnolia outside my office window at work is covered in buds. Surely the warmer spring weather can't be far away now?
Posted by Louise at 13:17 1 comment:

It is hard to believe that this is my 100th post already. I have had a lot of fun and met many talented people, both in person and online. To celebrate and thank you for reading, I thought I'd have a giveaway. The prize is another Artsy Clutch (are you sick of them yet?). This one is made from the last of my lovely Lara Cameron raindrops linen in duck-egg blue. It's lined with a plain coordinating fabric and finished with a couple of buttons.
To be in the draw, please leave a comment on this post before next Wednesday.
Posted by Louise at 07:50 25 comments: I knitted this hat to match the pink kimono cardigan I made for my niece, who is due in October. I didn't really use any one pattern, but consulted a couple of books to find out how many stitches to cast on. I think it's more like 9-month size than newborn size, but indications are that she is going to be a big baby (my brother is 6 foot 2), so maybe it will fit her sooner than I think.
I once again used the NZ Naturally merino et soie yarn I love so much. I wanted to use what was in my stash, hence the stripes since I didn't have enough of any one colour. But I think they work. I decided while I was knitting it that the bold stripes remind me of something out of Who-ville (from Horton Hears A Who).
Posted by Louise at 07:03 4 comments:

..or rather on the dining table, since my sewing table is in the coldest part of the house, are piles of fabric waiting to be cut out for baby shoes. Over the weekend I finally sorted out the sizing and style of my baby shoes. All going well, I should be able to open my Etsy shop by early September. In the meantime, there is a lot of cutting out to do. 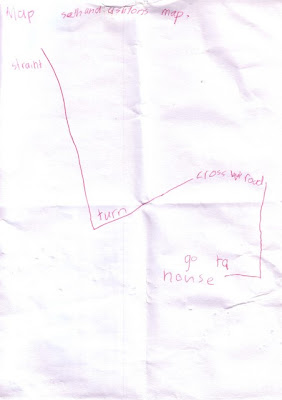 I found this map in our front yard last week. It says seth and ashtons map. The directions are straint, turn, cross road, go ta house. Hopefully the treasure hunters got to their destination OK without the help of their map.
Speaking of treasures, I discovered one of the crafty kind today - a shop called Minerva on upper Cuba St. It specialises in textile books. Wow. It isn't open on Sundays but I stood with my nose pressed to the window for ages. I could see quilting, sewing, textile design, felting, crochet and knitting books. I will definitely have to go back when they are open and spend some serious time browsing.
Posted by Louise at 15:06 3 comments:

Last night I made one of our favourite winter dinners - roast vege salad. It doesn't look that appetising in the photo below, but it was delicious. I don't really have a recipe as such, instead it's more of an idea. You chop up lots of roastable vegetables into chunks (this time I used pumpkin, kumara, yams, carrots, red onion, courgette and capsicum but eggplant and potato are also nice), then toss them in a little oil and garlic (I used garlic-infused oil which makes things easier), season with salt and pepper and then chuck them in the oven at 220 degC for about 40 minutes or until they are tender. Take them out of the oven, and while they are still hot, drizzle a little balsamic vinegar over the top and mix through. Serve warm or cold.
I sprinkled some sunflower seeds over the top of each serve (for protein) and then put a dollop of pesto dressing on the top. I made the dressing by mixing some mayonnaise with some ready-made basil pesto. You could just use watered-down pesto. Or aioli. Or plain mayonnaise. Or even oil and vinegar dressing. Whatever appeals to you.

I always make too much of this, but the leftovers are delicious for lunch the next day. Or you can stir the leftovers through some tomato-based pasta sauce and use it as a topping on pasta.

Oooh, look what I received 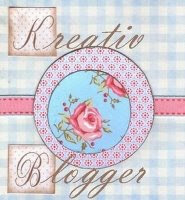 The lovely Gabes at SweetP Knits has given me the Kreativ Blogger award. Thank you! The rules say that I have to nominate another 5 blogs, but I don't think I can narrow it down, because there are so many that I enjoy and I don't want to leave anyone out. So instead, I'd like to nominate everyone on my Kiwi craft blogs list over to the right there. There are some seriously talented people in this little country of ours. If you haven't already, I'd encourage you to have a nosy at what everyone else is up to.

PS It seems that my 100th post is coming up soon. A giveaway is in the pipeline - stay tuned.
Posted by Louise at 07:55 No comments: A quick post before I head out for a run in the glorious sunshine. After a few days of horrible rain and wind (plus freezing-cold sleet yesterday), Wellington has turned on a stunner - little wind and clear sunny skies.

I made this clutch yesterday for a friend's birthday. The outer is made from Lara Cameron fabric and lined with a co-ordinating spot craft cotton. I also interfaced it with flannel to give it a bit more structure. Pattern is from Bend the Rules Sewing by Amy Karol. This is another almost instant gratification project. The most time-consuming part (apart from picking the fabrics out of your stash) is cutting out the 6 pieces of fabric. Doesn't this look good enough to eat? It's hand-dyed sock yarn from the very talented Morag at Vintage Purls. Morag was visiting Wellington from Dunedin this week and thanks to a bit of planning via Ravelry, she (and some of her lovely yarn) came along to the Wednesday night Stitch n Bitch group in Lower Hutt. I'm not a sock knitter (at least not yet), but I think this will knit up into lovely baby hats or mittens.

I had been meaning to go along to the group for some time, and I'm pleased I finally made it this week. As well as Morag, I also got to meet some other local Ravelry people in person. It was great to just have a couple of hours to sit and gossip while knitting. I think it might become a regular appointment in my diary.

On something else entirely, is anyone else have problems with Blogger and comments? My last post received some comments on Wednesday and then last night when I checked, they had disappeared. Very strange.

A farm in stitches I've been meaning to post these for a while. They are a series of small embroideries that I have been stitching on and off for quite a while. I think I started the first one sometime in 2006! The last one was finished just before we went on holiday. Despite looking like cross-stitch, they are actually petit-point or half-crosses, done on very fine 27-count linen. Finished size of each is around 8cm square.

I used to do a lot of cross-stitch on Aida cloth and I thought these Lanarte kits would be a good way to introduce me to embroidery on linen. I really like the restricted colour palette and the look of the rough natural linen.

I've been playing around with how I will frame them and I quite like this 2x2 arrangement. Once framed they will live in my sewing area, but hopefully one day they might hang on the wall of our child's room.

In an effort to keep my WIP crafty projects in the lounge looking a bit tidier, I recently bought one of those woven seagrass baskets with a lid. I sorted through the three large plastic bags that had been beside the couch and kept out only the knitting and embroidery projects that I am currently working on. The rest of the needles and wool and so on were consigned to my yet-to-be-organised craft area in another part of the house. Keeping the projects tidy in the seagrass basket has been a bit of a problem though - I keep misplacing needles and patterns. So yesterday I made myself a couple of project bags, to keep everything separate. These are based on a similar one I bought at Loop in London (you can see it at the back of this photo). They are just simple drawstring bags made from unbleached calico - really quick and easy to make (I think the most time-consuming part was re-threading my overlocker/serger with white thread before I started!). I used the freezer paper stencil motifs I made a while back to decorate them.
Now, I wonder how long everything will stay nicely organised this time?
Posted by Louise at 08:55 4 comments: