I got obsessed with making myself a sunhat last week. We have a work excursion coming up and were told to make sure we brought a sunhat. That reminded me that I didn’t have a nice sunhat (my current one is splattered with housepaint from our DIY over Christmas), which ensured that I would not rest until I had made myself one. Pattern from here but slightly resized to fit my big head! I also constructed it slightly differently so it could be reversible. I made a linen prototype first to get the fit right. That linen prototype became the lining. The black and white fabric is “Lily” by Joel Dewberry. I had originally planned to use some Lara Cameron fabric, but wanted to make sure the hat looked OK before I chopped into my precious stash. It turns out I like this hat just fine, despite the brim being a bit wonky. And I probably don't need to make myself two sunhats right at the end of summer...

Oh and if you were wondering about the amount of fabric needed, I only had a fat quarter of the Lily fabric and wasn't sure I had enough. Turns out you CAN get a hat (or the outside at least) out of a fat quarter IF the pattern is multi-directional. And you trace before you cut!

Edited to add:
It occurred to me that if any of you are going to attempt this pattern, you might like to know the changes I made.

The modifications I made to the sizing of this pattern was to add 1cm to each end of the brim and crown pieces (when I cut the paper shapes out the brim and crown pieces seemed too short for the top circle piece. Equally if your head was a bit smaller than mine, you could make the top circle piece smaller in diameter. My head usually fits a size 59cm hat.

I also made the brim narrower by about 2cm and the crown height shorter – I did this once I had sewn all the pieces together and tried it on for fit. I guess it is about trial and error until you get something that looks ok and fits your noggin!

To assemble the hat I assembled the entire outside and the entire lining, and then sewed them together around the brim edge, right sides together, leaving a gap for turning. I then closed the gap with a line of top stitching on the brim edge.
Posted by Louise at 10:42 8 comments:

So as I said in my last post, all our friends are having babies at the moment. This is a gift for Nicholas, who was born 11 days ago. Yesterday we got to meet him for the first time and have newborn cuddles. He was so sweet - I love that new baby smell. 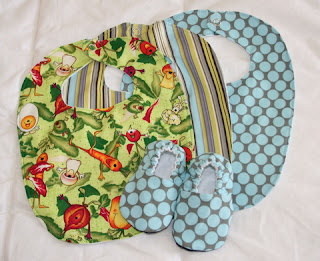 The shoes are made using a modified version of this pattern (I construct them differently to make them reversible). The bibs are made from Amy Karol's great pattern in Bend The Rules Sewing. The dots and stripes fabric are both Amy Butler, the vegetable fabric is Michael Miller.
A few people have asked me about how to make the shoes reversible. I was going to do a tutorial, but someone else in the Flickr Cloth Baby Shoes group has made one already. You can find it here. It is similar, but not exactly the same, as the method I use. I warn you though - they are fiddly and you will swear lots making your first pair! But they do get easier. I am going to modify the fit of the pattern further after trying this pair on baby Nick yesterday. They were way too big for his foot, but by the time his foot is long enough to fit them, the opening in the shoe will be too small. Hopefully I am getting closer to a design I can sell...
Posted by Louise at 19:08 3 comments:

This project has been a WIP for a wee while, but I finally got around to buying some teeny tiny buttons to finish them off. I used a free pattern from Shes Crafty and then added some crochet flowers made with the 100-flower scarf pattern here. The yarn is some brand new baby wool I picked up for a song at our local op-shop. All up I probably spent less than $2 on materials for these but I think they look pretty special.

This was my first time knitting 4ply wool and I discovered it takes a long time to produce much of anything when you are knitting on small needles with fine yarn - I'm usually a DK girl. I knitted these hoping to give them to some friends who had a baby last week, but they had a boy and I'm not sure they'd appreciate pink and white knitted cuteness! I'm hoping my friend who is due in early March is having a girl, otherwise these will have to be added to the gift box. I'm at the age where friends are having babies all the time so they will eventually go to a good home.
Posted by Louise at 11:55 8 comments: 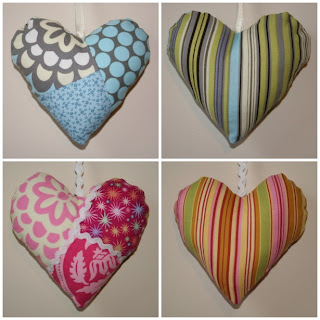 The fronts of the hearts are made from pieced together scraps from my stash. I used a coordinating stripe fabric for the back of each. A little while ago I bought a whole lot of designer scraps on TradeMe (New Zealand version of eBay), including some Amy Butler offcuts which were put to good use in these hearts. I used a heart template I found online and stuffed them with polyfil. They ended up about 14cm across.

Lots of crafting planned for this week. I’ve decided to take the plunge and start an etsy shop. I am working on a few bag designs and also some baby shoes. Pictures to come soon.

If you're in the Hutt tomorrow, come along and check out the Petone Fair on Jackson St from 10-4. I had originally planned to maybe have a stall at it this year, but I didn't get organised in time. It's usually a fun day out with a reasonable number of craft stalls and plenty of homemade fudge. Here's a photo I took at the 2006 fair. 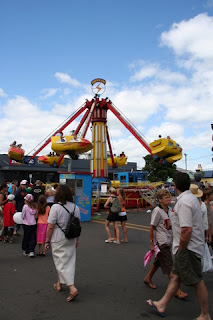 My advice would be to come early to make sure you can get a parking spot and avoid the rain that is forecast for later in the day.
Posted by Louise at 07:57 1 comment:

Fish on a Line

I finally finished the knitting WIP I showed you a couple of weeks ago.

This is a mobile made from a pattern in Knitted Toys by Zoe Mellor. It's for a friend whose baby is due in early March (I'm pretty sure she doesn't read this so I'm safe posting here). The pattern was a lot more fiddly than I'd anticipated. The fish are knitted from a chart which I found a little tricky at first. Once the fish were finished there were a whole heap of ends to weave in and then they had to be stuffed and threaded onto the cord (a lot harder than it sounds as the cord was pretty thick). But in the end I think it turned out pretty cute. The fish by themselves were also fun to play with - they would make neat Christmas ornaments or cat toys. And the mobile concept could quite easily be converted to a hanging toy to string across a pram. Hmmmm, maybe next time.
Posted by Louise at 16:16 10 comments:

We go through a LOT of hummus in our house. One thing that bothers me about buying hummus ready-made is that it comes in a container made of plastic that is not recyclable. I've been meaning to try making my own for ages and last week I finally bought some tahini (the vital ingredient I was missing from my cupboards). I know it looks a bit gross, but trust me, it is deeeelicious. Nice and garlicky with a bit of lemony tartness.
The recipe I used was one from the back of a can of chickpeas. I did use canned chickpeas this time because I wanted results fast, but next time I'll plan ahead and soak and cook some dried chickpeas. I'd also like to try it with sundried tomatoes or olives blended in.
Here is the recipe if you want to give it a go:
1 390g can of Chickpeas, drained and rinsed
juice of 2 lemons
2 cloves garlic, crushed
1 teaspoon of salt
100g of tahini paste
salt and pepper to taste
Drain and rinse chickpeas thoroughly and place in blender. Add next 4 ingredients. Blend to a smooth paste. Taste and adjust with salt and pepper. If required, thin down with lemon juice or water. Makes approximately 500g.
Posted by Louise at 13:48 7 comments:

I have been doing a bit of embroidery these past few days and remembering how much I enjoy it. I started out as a cross-stitcher - always on 14-count aida cloth, but more recently I have been doing some petit-point (half crosses) on evenweave linen. Next I'd like to tackle some simple designs on ordinary linen and cotton, perhaps in a single colour. Here are some photos from flickr that have inspired me lately: OK, so I was being a bit ambitious with all my weekend plans in my last post. I did get a few things accomplished, but not everything. One thing I did do was make plum jam. This is the 5th batch of jam I've made with plums from our tree and I am still amazed how the combination of just plums, sugar and a little water can produce delicious jam. Especially when the plums are small, really sour and basically inedible in their raw state. For the first two years we lived in this house I left the plums to the birds to eat because they were so sour. It never occurred to me to make them into jam until I was talking to a friend who said they might be damson plums. Since then the birds only get the plums that I don't want! I have some more plums in the freezer waiting to be made into chutney using this Delia Smith recipe. I made some last year and it is divine and well worth the effort (though this year I will cook it outside on the barbeque - it needs to be simmered for about 3 hours and last year the house smelt of chutney for weeks!).
Posted by Louise at 07:37 3 comments:

The renovations I mentioned a couple of months ago are finally complete, so I now have a crafty area in our house to call my own: 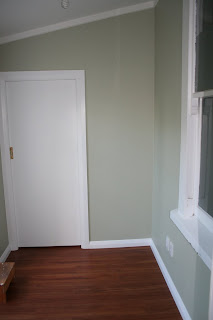 It's pretty small and is really only a porch area that you walk through to go outside or to the laundry (through the sliding door), but it's better than what I have now (sewing machine and craft stuff packed away under the window seat in our bedroom). Now I get the fun task of buying some furniture and setting up the space. I'd like an old wooden table to sew on and maybe a chest of drawers to store my fabric in (shelves would be ideal for my fabric but this room gets a lot of sunlight and I don't want to risk my precious fabric getting faded). Trips to the recycling places and second-hand furniture shops are planned for this weekend.

Also on the to-do list this weekend:
Hmmm, looking back at my list, I'm thinking I might be being a bit ambitious. Lucky we have a public holiday next Wednesday...

Hope your weekend is a good one.
Posted by Louise at 13:47 3 comments: